The catechist Ah Leng’s ministry among his fellow Chinese believers in Kudat and Sandakan was by all reports a success, yet as a layman he could not administer the essential sacraments of Baptism and Holy Communion, and it is likely that language barriers limited his work outside the Chinese community. The prayers and repeated requests of European Anglicans for a priest and a church were finally answered in the person of Revd William Henry Elton, a missionary of the Society for the Propagation of the Gospel (SPG), which had taken on the responsibility for Anglican mission work in Borneo.

The First SPG Missionary in Sandakan

Revd Elton, an Englishman, was already forty-three years of age when his feet first touched North Bornean soil in 1888. He had served previously in the mission fields of Ceylon and New Zealand, where he had been a minor canon and Precentor of Christ Church Cathedral, Canterbury. At the time of his arrival, Sandakan was a small town surrounded by hilly jungle, and the first church services which he led took place in the ‘old Shanty’ at the back of the ‘Barn,’ which was the historic residence of Mr and Mrs W. B. Pryer. Having been given permission by Governor C. V. Creagh to choose any piece of unoccupied land to build a permanent mission church, Revd Elton dutifully tramped through the thick jungle for a few weeks before deciding on a site on the top of a hill close to the town. The foundation stone for St Michael and All Angels Church was laid in September 1893, but it would take thirteen more years of challenging work before the beautiful Gothic-styled church—the first stone building in North Borneo, constructed primarily from locally-quarried grey-green granite—would be finished and fully-consecrated in September 1906.

In the meantime, Revd Elton got straight to work. He began St Michael’s Boys’ School almost immediately upon arrival, with just one pupil. Regular church services were soon held in the ‘School-church,’ built in 1889. St Monica’s Girls’ School was started in 1903 with the aid of Mrs Birch, the Governor’s wife. Miss Mary Butcher, also an SPG missionary, was appointed as headmistress in 1907. Revd Elton also ventured beyond Sandakan to encourage mission work, and congregations were formed through his efforts and encouragement in Kudat (1890), Keningau (1898), Jesselton (1899) and Tawau. In his twenty-five years of ministry in North Borneo, Revd Elton only went on furlough twice, the first time after nearly ten years of non-stop work.  He resigned and returned to England in March 1914 due to ill-health, and died that December. His faith, dedication, boldness, vision and practical abilities (not least as a builder) did much to lay a solid foundation for the Anglican Church in the region.

Building the Hakka Church in Kudat

In Kudat, the first capital of British North Borneo, groups of Hakka Christians were brought over from Hong Kong and China to meet agricultural labour needs. These believers had been evangelised by different mission societies, including the Anglican Church Missionary Society (CMS) as well as the Basel, Berlin, and Methodist Missions. As a result of their distinct denominational formations, they tended to worship in separate congregations. Revd Elton paid a ministerial visit to Kudat in 1888 and urged the Christians there to unite in one congregation in order that a single missionary could minister to them. He returned in 1890 with three carpenters to build a church and a school, but found to his dismay that the different denominations were still worshipping separately. The intense discussions that followed finally led to the formation of a single congregation, and St James’ Church opened that same year, with almost half of its baptised members being Basel Christians. 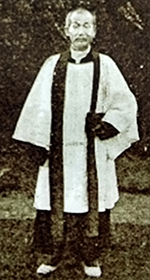 The first missionary to work at St James was Richard Richards, an ordinand sponsored by the SPG. After an orientation in Sandakan and an immersive learning of Hakka in Kwantung, Revd Richards was posted to Kudat in 1891 and served until 1902. He also encouraged the ministry of Mr Fong Hau Kong, a Basel-trained preacher whom he met in China and brought to serve as catechist and lay reader in Kudat from 1892. Fong was ordained deacon in 1898 and finally as a priest in 1910, the first Asian to receive Holy Orders in North Borneo. Revd Richards considered Revd Fong “a man of sterling worth and of great intellectual ability,” but unfortunately Bishop Hose and Revd Elton were slow to support Fong’s priestly vocation, possibly due to conservative attitudes about ordaining non-Europeans. Revd Fong served as a full-time priest at St James until 1920, and then part-time until he passed away in 1923.

The work of Revs Richards and Fong was augmented by others, such as Revd Arthur Mercer, who skilfully translated the BCP services of Morning and Evening Prayer as well as Holy Communion into Romanised Hakka. Their labours established Kudat as a centre for Hakka Anglicanism, a legacy which continues today in the Hakka Sunday services there, even as St James has broadened its ministry to Bahasa Malaysia and Mandarin speakers as well.

NEXT: SPREADING ALONG THE COASTS