When the Revd (later Bishop) Francis T. McDougall and his wife Harriette responded to the call of God take their place among the first group of Anglican missionaries to Borneo, it is unlikely that they could have imagined how their pioneering work in Sarawak and North Borneo would be built upon by many others in succeeding generations. Perhaps it is best to remember here the words of St Paul in his first epistle to the Corinthians: “I planted, Apollos watered, but God gave the growth.” (3:6) Each person who has laboured in the Lord’s vineyard here in Sabah has performed an important role, but it is God who made it all happen.

On 14 August 2009, a milestone was reached for the Diocese of Sabah when the Rt Revd Melter Jiki Tais was consecrated as Assistant Bishop in All Saints’ Cathedral, Kota Kinabalu. Bishop Melter, who is of Kadazandusun descent, was the first indigenous priest to receive episcopal office. In 2014, Bishop Albert Vun passed away in office due to illness, and Bishop Melter became the Vicar General. Following an Extraordinary Diocesan Synod in January 2015, he was appointed by the Province’s House of Bishops to become the sixth Bishop of Sabah, and was installed on 19 May 2015. 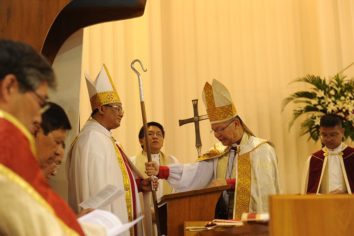 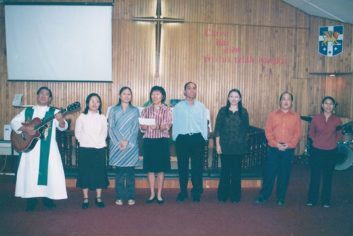 Bishop Melter (far left) in his younger days of ministry.

Bishop Melter was born in the rural village of Nangoh to parents who had converted from animism to Christianity in response to hearing the Gospel preached by Revd Arnold Puntang in the early 1960s. His primary education was at Holy Cross School in Kuala Sapi, the second school set up under the SAIM. Having made a personal commitment to Christ at the age of 14 during a Diocesan youth camp, he responded to a challenge of full-time ministry at the age of 18 while attending a celebration of the 25th Anniversary of the SAIM in Tongod. After nearly ten years of lay parish work and theological studies, he was ordained as a priest in 1993 and went on to minister in Keningau, Lahad Datu and Telupid. Before his elevation to the episcopacy, he had served as Archdeacon of the rural Central Region. From all these facts it is clear that he was the first Bishop of Sabah who was not only raised from the work of the inland mission, but who also returned to serve with great diligence and excellence in those very harvest fields.

The Uniqueness of Sabahan Anglicanism

The Diocese of Sabah is unique in the Province of South East Asia for its worship and witness which draws upon and synthesises each of what has been called the three “streams” of spirituality in historic and contemporary Anglicanism. These are the Evangelical tradition (Scripture), the Charismatic tradition (Spirit) and the High Church tradition (Sacrament). Most dioceses throughout the Anglican Communion have individual churches which can be said to stand in each of these streams—with some blending them—but it is rare for a “three-stream” synthesis to be the DNA of an entire diocese, as it is in Sabah.

Most of the early pioneers of Anglican mission in Sabah were from the SPG and thus—in theology, liturgy and spirituality—High Church or even Anglo-Catholic. They passed on to the Anglican Church in this region a reverence for the Gospel and the teachings of the church, a seriousness in devotion and a nurturing practical spirituality. The potency of what they delivered can be seen in the fact that it kept the local Christians faithful during Second World War, a time of trial and much persecution. 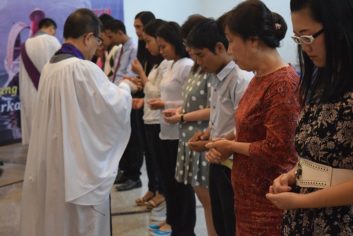 Holy Communion being administered at the Church of Christ the Cornerstone, Tarakan. 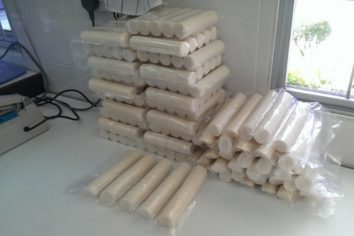 Packed communion wafers at the Community of the Good Shepherd.

Although the outward trappings of High Church liturgy—such as the use of incense and bells—have decreased markedly in the Diocese in more recent years as Evangelical and Charismatic churchmanship have increased in influence, the legacy of these founding missionaries continues in certain subtle ways, such as the widespread practice of weekly Holy Communion in churches with a resident priest. On the whole, while the worship of Sabah Anglican churches is no longer Anglo-Catholic, it continues to be strongly liturgical. The work and witness of the SPG missionaries also lives on in the Community of the Good Shepherd, an Anglican religious community, who from their small base in Kota Kinabalu maintain an ordered life of prayer and, among other works, manufacture communion wafers for the entire Diocese.

The evangelical revival which began during the tenure of Bishop Luke Chhoa in the 1970s has had an immense influence on the life of Anglicans in Sabah, who are generally characterised by a love of Scripture and a firm conviction that it provides the only basis for the Christian life. Among the marks of evangelicalism which can be seen in churches in the Diocese are Bible study (in recent times often merged into the life of cell groups), expository preaching and a strong emphasis on evangelism. 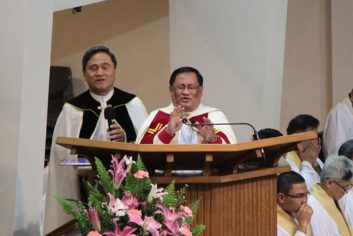 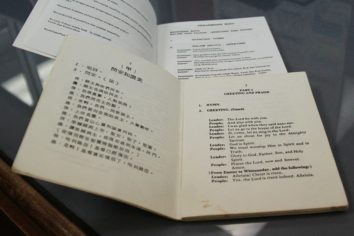 The Greeting in the Diocese’s 1984 Order of Holy Communion.

The belief that a solid grounding in the Scriptures is essential for effective ministry continues to be the foundation of the Diocese’s training strategy, which is evidenced in the continued use of Moore Theological College’s External Study materials in the Diocese’s Anglican Training Institute’s courses, for Moore’s syllabus is renowned for its evangelical focus on studying the Bible systematically. Besides this, the 1984 Holy Communion liturgy, which was produced by evangelical ministers and bears strong marks of their theology, continues to form the worship life of Sabah’s Anglicans whenever the Eucharist is celebrated. As the ancient Christian motto goes, the law of praying is the law of believing (lex orandi, lex credendi), and thus the common worship which we partake in shapes every aspect of our life of faith.

Alongside the High Church and Evangelical streams, the Anglican Church in Sabah has also been nourished by the Charismatic stream, beginning in the interior in the 1970s and increasing in the rest of the Diocese from the 1980s. The Pentecostal form of moving in the Holy Spirit is an important part of evangelism and pastoral ministry in the Church, as can be seen in regular revival meetings and altar calls where people come forward for prayer, to be ministered to by the Spirit and to be delivered from the evil one. 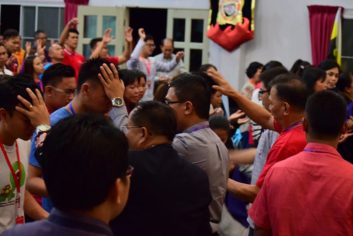 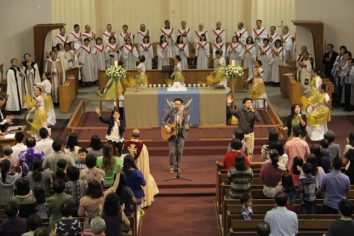 Worship at the installation of Dean Musa Ambai at All Saints’ Cathedral, 2018.

Furthermore, the worship of the Diocese has been enriched by contemporary Charismatic music—including songs written by homegrown musicians—and other Pentecostal practices such as free and spontaneous prayer and a rediscovery of the importance of fasting, which had been practised in a traditional form during the Anglo-Catholic period before losing its prominence amidst the evangelical revival. In some churches, contemporary praise and worship songs are sung together with traditional hymns and modern choral music. This blending of music styles has proved to be edifying to many. The same can be said of other aspects of what can be called a “Sabahan Anglican synthesis.”

As this brief history of the Diocese draws to a close, it must be noted that its brevity has meant that only a selection of the highlights of the years since 1850 have been covered. There are many other stories that have not been recounted here, and some of these can be found in various sources in the bibliography. Also, although some of the difficult patches in the history of Sabah Anglicanism have been discussed, including the war years and the years of “mild persecution,” it should be noted that there were others as well. For example, there have been times of internal strife which resulted in the departure of clergy and laity from the Anglican Church in Sabah. Such occurrences are lamentable, but should not be completely surprising, for the New Testament records various examples of dissension and discord even in the earliest years of the church. Nevertheless, God in His marvellous grace has continued to use the Diocese of Sabah for His purposes, even as He works to heal the wounds incurred and restore unity to the Body of Christ.

In these historical articles, many events involving many people have been narrated, but at the end of the day the most important figure, whose role is beyond compare, is undeniably the sole director of this long, elaborate and ongoing play, namely the Almighty God whom Christians worship and serve. He is the invisible God who has revealed Himself through the life, death, resurrection and ascension of His Son, our Lord Jesus Christ, and continues to be present in our hearts and lives through His Holy Spirit. It is hoped that this short account of the Diocese of Sabah provides the reader with a glimpse of God’s grace and power, for at the end all that has been done by His servants has been for the sake of His glory alone.