PREVIOUS: SPREADING ALONG THE COASTS

At the end of 1941, the invasion of the Japanese military in the middle of the Second World War severely interrupted the progress of Anglican mission and everyday church life in North Borneo, together with everything else in present-day Malaysia.

Across the South China Sea in Malaya, Japanese forces had entered the country through the northeast on 8 December 1941 and swept down the Peninsula rapidly, overpowering the weak British defences and reaching Johor in just over a month. The Battle of Borneo began on 16 December 1941 with Japanese naval landings in Miri, Sarawak and Seria, Brunei, capturing the oilfields there. Kuching was taken over on Christmas Day, and its Europeans—including Francis Hollis, the Bishop of Labuan and Sarawak, and Archdeacon Mercer who had served in Kudat—were detained and sent to prisoner-of-war camps.

In North Borneo, the Japanese assault started with machine gun fire upon Jesselton on 27 December. Labuan was invaded on New Year’s Day and secured by 3 January, when the first landings on the mainland also took place. Jesselton was occupied on 6 January, Sandakan on 19 January and Tawau on 4 February. Later that month, Kudat too fell, marking the complete take-over of the region by the invading forces. Foreign clergy and other missionaries were rounded up and imprisoned. For example, in Sandakan, these included Revs Reuben Henthorne and D. W. A. Brown as well as Sisters Irene and Alison, teachers and members of the Companions of Jesus the Good Shepherd, an Anglican religious order. 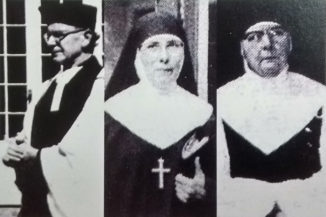 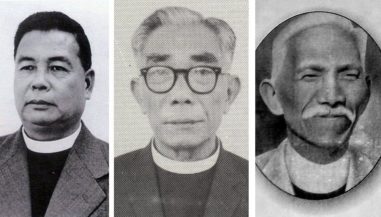 With all the Western missionaries in prison, ministerial care was taken over by the small number of local clergy. These included the five graduates of the College of the Holy Way, Kudat, namely Revd Chong En Siong in Kudat, Revd Lai Choon Sang in Tajau, Revd Vun Nen Vun in Beaufort, Revd Chin Phu Yin in Limbang, Sarawak and Revd Lim Siong Teck in Miri, Sarawak. Christianity was regarded as a Western religion by the Japanese and thus believers suffered persecution at the hands of the new administration, with their freedom to worship together limited and church buildings and other property seized. For example, Revd Chin was forced to leave Labuan and Brunei, after the churches there were taken over, for Limbang. Nevertheless, despite these difficulties, worship services continued to be held in homes and small chapels which were not requisitioned, and most believers continued to hold fast to the faith. Revd Gordon Boughton, in his history of the Diocese, writes that “their absolute loyalty… is a great testament to the foundations which [had] been laid” by the early missionaries and catechists. Meanwhile, imprisoned missionaries of various denominations ministered to fellow prisoners in the POW camps, conducting Sunday services, Bible studies, and burying the very many dead.

Rebuilding After the War

In May 1945, the Allies commenced Campaign Oboe to regain control of Borneo, and after a few months of fighting, North Borneo was fully liberated by October. The war had caused much physical destruction, taken many lives, and left many with deep psychological scars, but the time had come for the reconstruction of the church and Christian life together. 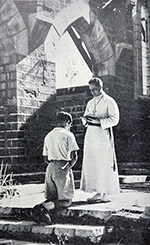 The work of rebuilding was a collaboration between locals and foreign missionaries who had made it through the war. One example is Mr Fu Yun Fatt, who kept a vow he made to God while living in the jungle to do all he could to help reconstruct St Michael’s Church and School after the war. Among those who survived the POW camp and returned after the war to serve were Miss Carlton, who restarted St Agnes’ in Jesselton, and Sister Alison CJGS, who restarted St Monica’s in Sandakan. Bishop Hollis arrived back in Kuching in 1946 after recuperation in England, but his declining health did not permit him to stay for long, and he departed again the next year, having served in Borneo for over thirty years as teacher, priest and finally bishop. Nigel E. Cornwall was appointed and consecrated as the new Bishop of Borneo. 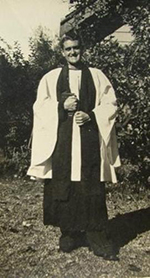 In order to rebuild the cohort of full-time ministry workers that had been devastated by the war, Bishop Cornwall approached Australian Anglicans, who had previously not been much involved in South East Asia, for help. The involvement of Australian forces in the liberation of Borneo had put it on the map for Australian Christians who were looking to serve in the mission field. In the coming decades, especially until the early 1970s, dozens of them from the Australian Board of Missions (ABM) and the Church Missionary Society of Australia (CMS-A) would arrive to serve in North Borneo as nurses, pastoral workers, priests, and teachers. Some, like Revd Walter Newmarch and Revd Ken Perry, had even been soldiers on the front line, and responded to the call to return to North Borneo after completing their theological studies. Furthermore, those from CMS-A would introduce an evangelical influence which would play a key role in the subsequent history of Sabah Anglicanism, which had been largely High Church or Anglo-Catholic up until the war.

The wartime experience of the church was a most painful and heart-rending one. Members of the Body of Christ had been torn apart due to imprisonment, forced migration and death. However, the removal of expatriate clergy and laity forced locals to take on responsibility and leadership which had previously been shouldered by the missionaries and Western laypersons. It was a brief experience of how the church would function should the local people be left on their own. Rather than falling apart as some might have expected, the church had stayed together and continued to bear witness to the life-changing Gospel of Jesus Christ. This fact was probably a source of encouragement when the church faced a similar situation some decades later which called for the growth of domestic ministry.