For much of the history of the Anglican Church in Sabah that has been narrated thus far, there was no Diocese of Sabah, but rather larger dioceses of which Sabah was only one part. Rather than a drawback, however, these conditions were used by God in fruitful ways. For example, at the beginnings of the Interior Mission, the fact that Sabah was part of the Diocese of Borneo under Bishop Cornwall meant that he could assign five Sarawakian Ibans as some of the first missionaries. Had the Diocese of Sabah been an independent entity at that point, it would have been much harder to call on help from Sarawak. However, by the end of the 1950s it became increasingly clear that a division of the very large area of Borneo into two Dioceses would strengthen the church’s life and help the work of mission.

The Founding of the Diocese of Jesselton

By the beginning of the 1960s, the Anglican Church in Sabah had not only a notable presence in the major towns along the coasts and smaller settlements near them, but also a growing Interior Mission extending deep into the ulu. Meanwhile, the Diocese of Borneo’s base in Kuching, close to the northwest tip of the island, was nearly a thousand kilometres away from Sandakan, making travel, communication and coordination difficult. The time had come for a partition of the Diocese into two. The seat of the new diocese, whose territory was the whole of Sabah as well as Labuan, was to be in Jesselton, which had been made the capital after the war. The first Bishop of Jesselton appointed by the Archbishop of Canterbury—under whose jurisdiction the Diocese still was then—was James Chang Ling Wong, a priest from China who had served with distinction in Hong Kong. All Saints’ Church, with its impressive new building, completed in 1959, became the cathedral. 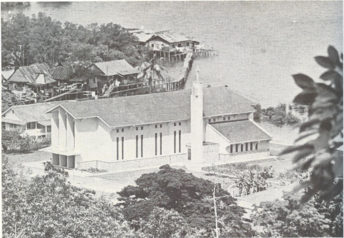 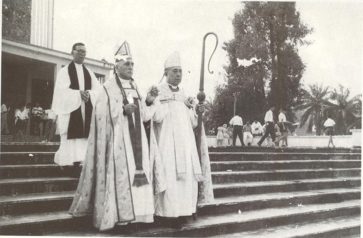 Although Sabah was now a diocese of its own, its full-time workers, both clerical and lay, were made up primarily of expatriates. Out of the fourteen priests, only one—Canon Chin Phu Yin—was a Sabahan. Furthermore, important positions in the churches and schools—such as rector or principal—were almost entirely in the hands of SPG and CMS missionaries. While no-one could question the dedication and capabilities of these non-Sabahans, the need for indigenous or at least Asian leadership began to be keenly felt.

In 1964, Bishop James Wong was elected Bishop of Taiwan, and moved on to his new role. His place was filled by Roland Koh Peck Chiang, a distinguished son of Sandakan who had been educated overseas but was then serving as Assistant Bishop of Singapore. His keen insight made him the right man to begin the work of moving towards an Asian ministry.

The Gradual Rise of Local Leadership

Bishop Koh laid his case before the Diocesan Council in 1966, a year after he was installed as bishop. By that point, there were no Sabahan clergy in full-time active service, and he argued that what the Diocese needed was for at least 80% of its full-time priests to have been born and raised in Sabah. Nevertheless, by 1969, the situation had persisted, with a USPG report stating that 91% of the Diocese’s clergy were expatriates, possibly the highest proportion in the entire Anglican Communion. If Bishop Koh’s urging of the Diocese to address this problem was not fully successful, political developments in Sabah towards the end of the decade would send Anglicans a much louder wake-up call, one they could not ignore.

In 1967, a new state government led by the United Sabah National Organisation (USNO) took power. It rapidly became more and more hostile toward Christian missions. New missionaries were denied entry, and those in Sabah were not allowed to renew their work passes. One by one, these expatriate servants of God were forced to leave, until there were only six full-time stipendiary priests left in the Diocese. The only missionaries permitted to stay were Miss Sylvia Jeanes and Miss Marianne Wise, very likely as they were staffing respectively the school and clinic deep in the interior at Tongod. Thankfully, leadership of the schools had largely been handed over to locals in an orderly fashion, but Bishop Koh’s repeated warnings about the grim clergy situation bore only limited fruit in the ordinations of Revd Yong Ping Chung and Revd Lawrence Lawin in 1970.

In 1970, Bishop Koh was called to become the first bishop of the new Diocese of West Malaysia. His departure was the beginning of two years in which the Diocese would be without a head shepherd. Bishop Koh’s bold vision of a vibrant local leadership sadly did not come to fruition during his tenure. The arrival of the third Bishop of Sabah, however, coincided with a fresh spiritual wind blowing through the state. This was the beginnings of an evangelical revival, which would re-energise the Anglican Church in the Land Below the Wind and raise a new generation of full-time workers, most of them children of Sabah.

NEXT: THE EVANGELICAL REVIVAL