Many Sabahan Anglicans today would identify themselves as “Charismatic” or “Spirit-filled.” How did this identity, which is not universal in Anglicanism around the world, take shape in our Diocese?

The Pentecostal movement of renewal in Christianity began around the turn of the nineteenth century into the twentieth. Its most distinctive element is a focus on the gifts of the Holy Spirit, such as speaking in tongues and healing, which many Christians thought had ended after the Apostolic Age of the Early Church. During the first decades of Pentecostalism, Christians from non-Pentecostal churches who received what became known as the “baptism of the Holy Spirit” generally joined Pentecostal churches afterwards. However, around 1960, a new phenomenon arose whereby believers in mainline churches who experienced such a baptism and the gifts of the Holy Spirit began to stay in their own denominations in order to witness to and help spread their Pentecostal experiences. One key moment in this historical development, which became known as the “Charismatic Movement,” took place in 1960 when Father Dennis C. Bennett, an Anglo-Catholic priest in California, openly shared his Pentecostal experience story with his congregation. The controversy that it caused marked the beginning of an incredible growth of the Charismatic Movement in the Anglican Church and many other denominations around the world.

Our journey of tracing the beginnings of the Charismatic Revival in the Diocese of Sabah takes us not to major urban centres and their long-established Anglican churches, but to a perhaps surprising place. In 1973, deep in the interior at Tongod, Miss Sylvia Jeanes was serving as principal of the Epiphany Mission school. Suddenly that year, the regular Sunday evening sing-song for the school children was anointed with a fresh fire, and the students began to worship and pray in a free and spontaneous way. This new-found fervour led them to memorise Scripture verses with great eagerness and compose worship songs in their own languages. 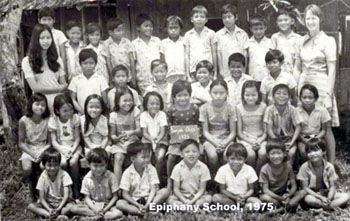 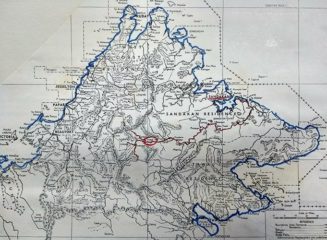 In 1974, Miss Jeanes was appointed as lay chaplain to the Kinabatangan churches. Calling together the lay-readers and catechists, she conducted a basic course to assist them in leading their congregations. They were very taken by the memory-verse learning system and new short choruses which were easily sung by even the most illiterate. As they took these back to their churches, the same enthusiasm and liveliness which had come upon the students began to spread across the congregations in the area. Within a year or so, what Miss Jeanes called the “latter rain” fell also on the Anglicans in rural Sapi and Segama.

A Charismatic revival had been sweeping through the evangelical Sidang Injil Borneo (SIB) from the early 1970s. In 1975, Mr Belunduk, the Principal of the SIB Namaus Bible School was invited to Tongod. His bold sermons were the first time that the rural Anglicans heard a person of their own ethnicity preach the very Gospel which the missionaries had been trying to communicate for years, and the people responded by making personal commitments to Jesus Christ. This wave of revival in the interior could be seen as the earliest stirrings of the Charismatic movement in the Diocese, but due to its remote location, the lack of dramatic signs and wonders, as well as the strong emphasis on the Bible which accompanied this Holy Spirit movement, it did not openly clash with the ongoing evangelical movement in the cities.

The Fire of the Holy Spirit 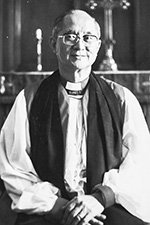 Within the Anglican Church in what is now the Province of South East Asia, the earliest Diocese to embrace the Charismatic renewal was Singapore, with its Bishop, the Rt Revd Chiu Ban It, experiencing the baptism of the Holy Spirit in 1972 after reading Nine O’Clock in the Morning, a book by Fr Dennis Bennett. Canon Frank Lomax, who had played such an instrumental role in Sabah in the 1950s and 1960s, was himself baptised in the Holy Spirit while serving back in England, and returned to the region to take up the role of Dean of St Andrew’s Cathedral, Singapore, which became a hub for Charismatic renewal.

It was not until the late 1980s, however, that Charismatic influences and practices became increasingly noticeable in the Anglican Church in Sabah. The earlier scepticism of many clergy and laypeople who stood firmly in the Reformed evangelical tradition gradually softened even as the positive impact of Charismatic experiences were noted. For example, previously nominal Christians grew swiftly in faith and became very committed following their being baptised in the Holy Spirit, similar to the way that those touched by the evangelical revival had experienced transformation. Nevertheless, there was a concern that Charismatic teachings and practices be balanced by sound Biblical teaching. Bishop Yong Ping Chung, who took over as head shepherd from Bishop Chhoa in 1990 following the latter’s retirement, wrote in a 1994 letter that it was important to emphasise both a “solid Biblical foundation and renewal of the Spirit for each believer.”

Bishop Yong, previously Archdeacon of Sabah and a most experienced clergyman, had been consecrated as Bishop at All Saints’ Cathedral on 25 September 1990—the first time an episcopal consecration had taken place in the state. Like Bishop Chhoa, he had a strong focus on outreach and evangelism. Among the initiatives during his tenure was Mission 113, a evangelistic strategy that challenged the 9,000 people across the Diocese who were regular worshippers to each make one disciple every three years. Begun in 1993, the aim of Mission 113 was to double the number of those who regularly worshipped to 18,000 by 1996, and then 36,000 by 1999. There was a new stress upon friendship evangelism and empowering ordinary laypeople to evangelise, rather than relying upon clergy, lay workers or visiting preachers. Although M113’s ambitious targets were not fully met, Diocesan membership doubled during the 1990s. 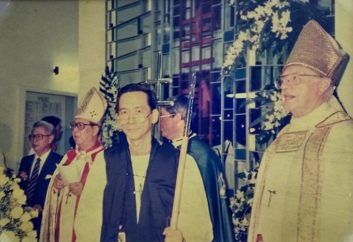 Bishop Yong on the day of his consecration. Robert Runcie, Archbishop of Canterbury, on the right. 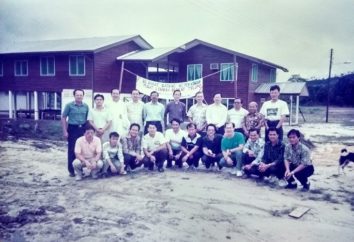 Opening of the Valley of Blessings, Telupid.

Mission work in the interior was greatly blessed by the opening of the Valley of Blessings, a training centre in Telupid which seeks to train the Bahasa Malaysia-speaking laity as well as being a centre for Diocesan conferences and retreats. Dedicated by Bishop Yong on 3rd February 1991, it continues to serve as a wonderful gathering place for equipping, inspiring and nurturing the people of Sabah Diocese.

Another key development that occurred during this period was the formation of the Province of South East Asia.  Up until this point, the Anglican Church in South East Asia consisted of four “extra-provincial” dioceses under the metropolitan oversight of the Archbishop of Canterbury. Among other things, this meant that bishops of these dioceses were appointed by the Archbishop of Canterbury. The idea of an autonomous ecclesiastical province in South East Asia had been mooted as early as 1933. However, due to various reasons, such a vision was only realised in 1996, with the dioceses of Sabah, Sarawak, Singapore and West Malaysia joining together to become the 31st province of the Anglican Communion. The first Archbishop of South East Asia was Bishop Moses Tay of Singapore, who served from 1996-2000. 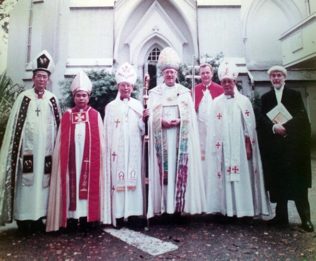 Inauguration of the Province of South East Asia. Archbishop Moses Tay is to the left of Archbishop Carey. Bishop Yong on far left. 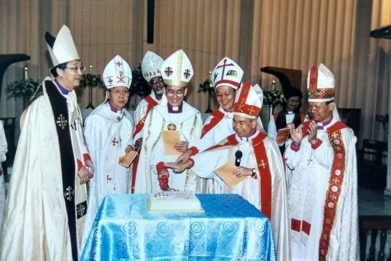 Archbishop Yong hosting the 8th Anniversary of the Province in All Saints’ Cathedral.

In 1999, as Archbishop Moses Tay approached retirement, Bishop Yong was elected by the Provincial Synod to become the second Archbishop of South East Asia. It was truly an honour for both Sabah and Malaysia that a Sabahan was chosen to be the Province’s second Archbishop. The duties of the Archbishop include providing pastoral support for and visiting the Dioceses and Deaneries in South East Asia, as well as representing the Province at the global level, such as at the Meetings of Anglican Primates from around the world. Hence, the Diocese of Sabah entered the third millennium with its chief shepherd also holding the weighty responsibility of Primate of South East Asia.

NEXT: ENTERING THE NEW MILLENNIUM