As the turn of the millennium approached, the Anglican Church in Sabah had been in existence for 150 years—that is, since the first Anglican services were held in Labuan. On the mainland, the Anglican Church had been established officially for 111 years since Revd Elton began his ministry in Sandakan. Meanwhile, the One, Holy, Catholic and Apostolic Church which was founded upon the birth, life, ministry, death, resurrection and ascension of Jesus Christ was nearly two thousand years old, having both endured persecution and experienced institutional power during this long period. As this milestone of the year 2000 approached, a good number of believers must have been wondering: what would the third millennium AD bring for the Church? Indeed, what would this new millennium bring for Anglicans in Sabah?

Across the Border into Indonesia

Perhaps the simplest answer is that the Gospel of Christ continues to be preached, new disciples made, and the Kingdom of God extended. The story of the Diocese thus far has been one of the progress of the Gospel in the state of Sabah, from coastal towns to rural heartlands, and from established parishes to less reached areas. Especially in the early years, missionaries from other countries and Sarawak played a key role in this tale. By the early years of the new millennium, the time had come for the Diocese to begin sending out its own long-term missionaries to foreign lands, in order to play its part in the fulfillment of Christ’s Great Commission to his apostles—and thus to the Church—to make disciples of all nations, baptising them and teaching them His commands. Thus it was that this period of the Diocese’s history saw not only growth in the rural and urban areas of Sabah, but also the expansion of mission work abroad.

The Diocese’s mission work in Indonesia began in 2000 when a short-term mission team from St Patrick’s, Tawau visited the city of Tarakan. During this trip, three people responded to the Gospel and became Christians. After a second mission trip three months later, it was decided to send Ps Flora Chong as a full-time missionary to Tarakan. The first church service was held on 20 August 2000 with just two congregants and some visiting short-term missionaries. The congregation grew steadily using a cell church structure, and a partnership developed with the Gereja Anglikan Indonesia (GAI), under whose governance the Church of Christ the Cornerstone (Gereja Kristus Batu Penjuru), Tarakan exists today. In 2006, a daughter church was planted in Kopri, the Church of Christ the Rock (Gereja Kristus Gunung Batu). 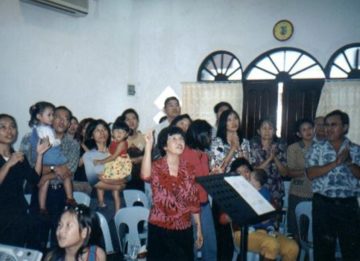 Worship service in Tarakan in the early days. 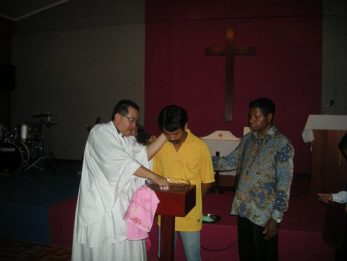 In 2002, reports were received that there were people who had yet to hear the Gospel in parts of Kalimantan, Indonesia which were close to the Sabahan border. The idea of commencing a mission to these areas was accelerated by a new immigration law passed by the Malaysian government later that year, which resulted in the deportation of 400,000 Indonesian workers, most to that very region of East Kalimantan, including many leaders from the Diocese’s BM services. As a result of this dramatic situation, the decision was made to commission Martin Ataring as a missionary. Martin was a respected Indonesian lay leader who besides being among the deported had a clear vocation to full-time ministry.

In many ways the early days of the East Kalimantan mission resemble the earlier period of the Sabah Anglican Interior Mission (SAIM). The same difficulties of poor transport links and staff limitations had to be faced by Ps Martin, his early colleague Michael Francis, as well as clergy and laypersons from Sabah who made short-term trips to support the work. But by the gracious leading and provision of the Lord, the work in Nunukan grew steadily. The first Communion service at the new Church of Christ the King of Kings (Gereja Kristus Raja Segala Raja), Nunukan took place on 22 July 2007. Of course, none of this pioneering work in Indonesia would have been possible without the generous financial, missional and prayer support from other churches in the Diocese.

In 2006, the Most Reverend Yong Ping Chung retired, having served as Bishop of Sabah for sixteen years, and Archbishop of South East Asia for six years. Much had happened during his long and distinguished tenure, including a trebling of weekly attendance from just over 6,000 in 1990 to over 17,500 in 2005. This could be attributed to the focus on evangelism and renewal which had been a constant theme during Archbishop Yong’s leadership, as evident in strategies such as Mission 113 and the widespread evangelism training which was made available. 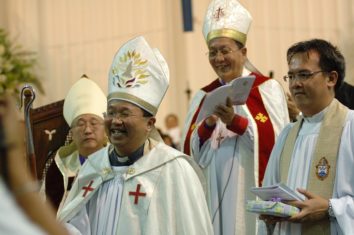 Archbishop Yong’s successor as Bishop of Sabah was the Ven. Albert Vun, Archdeacon for Urban Areas. At the time of his consecration, he had served in the Diocese for 23 years and had demonstrated formidable skills in organising and setting up new initiatives. For example, he oversaw the transition of St Patrick’s, Tawau in the early 1990s from a conventional church model to a cell church model, which resulted in tremendous growth in church attendance and involvement. As Bishop, he put these skills to notable use during the eight years which he served. Among the projects that were begun or revamped under Bishop Vun’s leadership was the School of Ministry and Mission (SOMM), which was set up in 2010 to train full-time workers who had not received formal seminary training. Modules were adapted from Moore College’s External Studies course as well as developed in-house in accordance with the specific needs of the Diocese. The SOMM later developed into the Anglican Training Institute (ATI), which is presently the primary form of training for Diocesan full-time workers, offering courses which lead to a Certificate, a Diploma or a Bachelors Degree in Theology.

Across the Sea to Thailand

The Diocese’s long-term overseas mission work was further expanded when two young women, Arminah Aik and Faustina Foo, were licensed and commissioned as missionaries to Thailand in November 2008. The city of Rangsit was identified as a suitable place for mission, given the sizable university student population. The two missionaries began their work by befriending students and introducing them to the Gospel through running Alpha courses. A number of them accepted Christ, and on 28th February 2010 the first Sunday service of the Rangsit Anglican Outreach Center (RAOC) was held. Despite facing challenges, including a severe flood in the area in 2012 that damaged almost all the homes of members of the congregation as well as the centre itself, the work in Rangsit has continued to grow. Today, Rangsit Anglican Church has a full-time priest working alongside lay pastors and leaders. 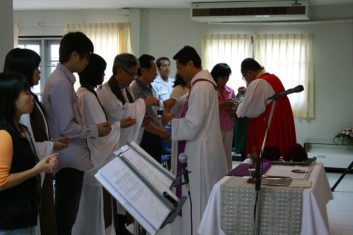 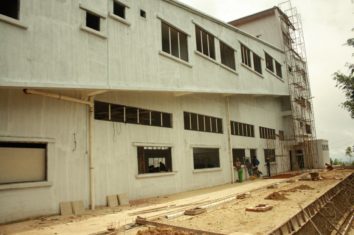 Back in Sabah, various other developments were taking place. Construction of the Kokol Prayer Summit, a Diocesan retreat centre 1,000m above sea level on a hill close to Kota Kinabalu, commenced in 2009 and was completed the following year. Shaped like a cross on its side, its unique architectural design was inspired by a painting on a wall along the Via Dolorosa in Jerusalem of Jesus carrying His cross. Meanwhile, the sisters and lay associates of the Community of the Good Shepherd, Sabah’s only Anglican religious community, started manufacturing communion wafers. They presently supply the needs of all the parishes in the Diocese. In these and other ways, the timeless Christian discipline of “prayer and work” continued to be practised.

NEXT: THE STORY SO FAR