Pastor Sylvia Jeanes (also known as “Ibu Suria”) was sent to Sabah as a missionary teacher by the Church Missionary Society Australia in 1967. Over the past 51 years she has faithfully served as a teacher, principal, lay chaplain, parish worker, itinerant trainer, seminary lecturer, and now as head of a school for migrant children who have no access to state education. In this first part of an interview at Rainbow of Hope, her school in Kota Kinabalu, she tells us about her childhood and how she became a Christian, as well as how she answered the call to missionary service overseas, which led to God sending her to Tongud, in the heart of Sabah.

Q: Could you tell us a little bit your childhood in Australia?

I was born on 2 May 1941 to a father who was a truck driver and a mother who was a housewife. So I don’t come from sophisticated and educated family, but a very grassroots, simple family. My mother had five children in seven years and she looked after them by herself. I went to primary and secondary school in Brisbane, Australia. I had a fairly good childhood, in that my parents stayed together and we lived all in one home. At Christmastime we went camping in my father’s truck. As I recall, my childhood was reasonably happy. But every now and again, being a very willful child, I sometimes did the wrong thing, such as stealing from my mother or beating my brothers up. My father would respond by giving me a thorough thrashing. I was the only one who got thrashed so badly in my home. But it was alright.

I finished my primary school and then I went to state commercial high school where I learned typing, shorthand and bookkeeping. This was the first time anybody in our family had been to high school. I finished high school after the Junior Certificate, which is like finishing Form 3. My parents thought it was time for me to go out and work at 15 years of age, and I was happy to go out and work too. 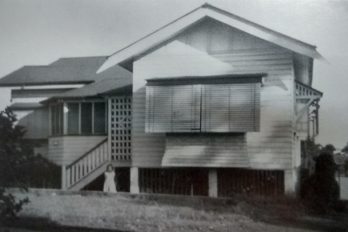 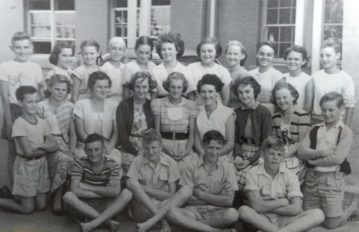 Q: What was your first job?

I went to the post office one day and saw an advertisement in the window which said they were inviting applicants for the job of telephonist. The wage was 7 pounds and 8 pence a week. Wow! If I worked in an office, I would only get about 4 pounds 10 shillings a week, so I applied. There were about 100 applicants, and everybody was tested. I passed in the first ten, together with my other friends—one called Marjorie.

Marjorie was going to be baptised about May the following year in a Baptist Church. I’d gone to Baptist Church Sunday School as a kid so I had a certain nostalgia for the Baptist Church. So, I said, “Oh, yes, I’ll come.” We went along together with another friend. We were early, and the minister came and said, “Would you like to come to the prayer meeting?” I’d never heard of prayer meetings, but my other friend said, “We should go for Marjorie’s sake.”  So I said, “Alright.” Now God touched my heart in that prayer meeting. Everyone was praying extempore—I’d never seen anyone pray extempore in my whole life. And it touched my spirit as well, so I stood up and prayed extempore as well for Marjorie as she went through the waters of baptism that God would bless her.

Q: Wow. So that’s when you became a Christian.

Well, that was the beginning. It was like God inviting me into his presence, then coming into my life and saying, “Well, alright, you’re mine. You follow me.” I don’t consciously remember any Gospel presentation or response. But what I do remember was the warmth of the fellowship calling me in, and I just loved it. I went home that night different. I’d been touched by the love of people and I never turned back.

As I said, I went to work in the telephone exchange, connecting calls. The supervisor there was a lady called Rose Tytherleigh. Rose had been a Baptist missionary in the Solomon Islands with her friend Ruth James who had been a missionary in Japan. These two were icons to me. Rose discipled me in those early days in the half hour we had together between the end of my shift at 9pm and hers at 9.30pm. She taught me how to pray, how to connect with the Radio Bible Class. She’d get little books and give them to me. 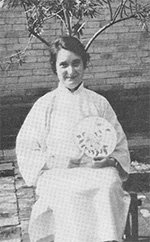 Q: How did your Christian walk progress from there?

My friend was a Baptist, but she fell in love with a policeman who happened to be an Anglican and a member of the Church Missionary Society (CMS) League of Youth. Before that she herself was linked to the Overseas Missionary Fellowship (formerly China Inland Mission). I went along to those meetings first, and that’s when I heard the call. Somebody preaching said, “Millions of Chinese are dying without Christ. Who will go?” And I remember putting my hand up and saying, “I’ll go.” I was very attracted to China, inspired by Isobel Kuhn and Gladys Aylward who’d been missionaries in China. I read their biographies avidly.

Q: How did people around you react?

Well, my family thought it was cracked. You could go to church, but why be a fanatic and throw your life away to go overseas and so on? To me, I wasn’t throwing my life away, I was gaining everything. To me this was the way forward. Also, I had a boyfriend at the time, and we were thinking about getting married, though we were only teenagers. But I began to feel that there must be more to this world than getting married. So I told my boyfriend, “I don’t want to get married yet.” Well, he went off and found somebody else and got married to her instead.

Q: Gosh. What happened next in your journey?

I had gotten promoted after passing an exam and was working in the customs department. But I felt I had to do more, so I joined a night school. I was asked what I wanted to do. I thought to myself, “What could I do overseas with no education, coming from a poor background?” So I replied, “I want to be a teacher.” Miracle of miracles, I passed all the subjects and was given a scholarship to go to teacher college the next year. To me that was a miracle because nobody of our level of family ever thought of going to teacher’s college and becoming a teacher! We were the riff-raff, we were the working class.

Q: How did your family react?

I remember going to the post office with my father to collect the results and an offer of going to teacher’s college. I came out and said, “Oh, Dad, I got the…” “You’re bloody stupid,” he said. That was his condemnation of me. He didn’t say, “Oh, wonderful, well done!” So I didn’t have any family support.

My brother worked at the local theatre. He told us The Inn of the Sixth Happiness was on—the story of Gladys Aylward in China. For the first and last time I remember, my whole family went to the cinema. My father asked me when it finished, “You still want to be a missionary?” I replied, “Oh, Dad, more than ever.” He said, “You’re bloody stupid. You want to give your whole life away like that lady? Didn’t you see all the bombs, all the destruction?” But I said, “Yes, Dad, more than ever I want to go.” They just thought it was crazy, to want to throw my life away, going so far away overseas. Only I know I’d done the right thing. I had absolute confidence all the way along that everything that happened was God’s doing, God’s will for me. 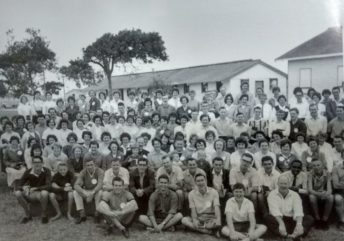 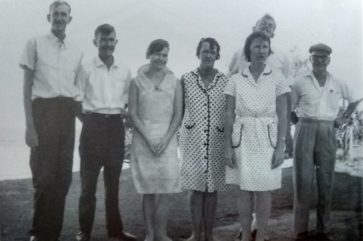 Q: So you went to college?

Into college, then out to get teaching experience before CMS would accept me as a missionary. Altogether all my training for coming to Sabah took 9 1/2 years from when I first got accepted to the teacher’s college. From 1961-1964, I was teaching in a semi-rural primary school. Very, very basic—not even enough classroom space. I wanted to teach the older children, but the Principal put me in charge of Primary 1.

I had 48 kids, and shared the only one classroom we had for Primary 1. 96 kids in one classroom. The other lady was an experienced teacher, but she got sick. So I ended up teaching 96 kids. Within the first 3 weeks I thought I’d go crazy. I used to take one class out to sit on the cement with slates as writing tablets. The children had to sit down on leaves and pieces of newspaper under the trees. I used to wonder why on earth I had to suffer like this. Anyway, that was the beginning of teaching.

Q: Straight into the deep end.

Oh, straight into the deep end. Then in 1964, my time came to go to Moore Theological College in Sydney. We had a ladies’ college called Deaconess House, attached to Moore. We learned together with all the guys. I did my Deaconess House training and at the same time pursued my Licentiate in Theology, which is like a Diploma in Theology but with Greek. After two years, I got four subjects in my Licentiate and my Deaconess diploma. So in 1966 I went on to St Andrew’s Hall, the CMS training college. We learned all sorts of things—linguistics, missionary strategies and philosophies, as well as practical things like how to make bread, how to drive a Landcruiser over terrible roads and how to sleep in tents.

At the end of 1966, I was passed to become a missionary to Sabah. You never really knew where your posting would be until the candidates committee met and told you. I had always felt I wanted to go to the China, but it had closed due to the Communist revolution. Bishop [Roland] Koh was the Bishop of Sabah, and we had nine primary schools and five secondary schools in those days. He desperately needed teachers, and asked if CMS could send him some teachers. So I was one of the teachers who came.

Q: Were you the only primary school teacher from CMS? 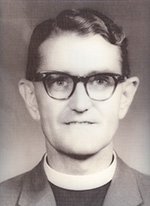 There were a few others. Jocelyn Swanston, for example, was the principal of the primary school in Segama, Bukit Belacon. I wanted to be just like her, to go to Segama to teach and evangelise like her. But God always knows better, He’s always got it sorted out long before we can figure out what’s going on! [Revd] Walter Newmarch in Tawau was in charge of us all in CMS. He and Bishop Koh first decided I should do the groundwork for the formation of Christ Church [Likas]. I freaked out and said, “No, I can’t do that.” I really wanted to go to the Interior with Jocelyn. Yet my love was for the Chinese people. I was confused. In the end, they decided I should go to Tongud to be with Elsie Elliott, the nurse there. She’d been in Segama, but went to Tongud in ’66. As she was the only CMS person there, I was to go to be her friend in the Lord. That’s how it turned out.

In the next part of the interview, Ps Sylvia talks about her years in Tongud as a teacher, principal and lay chaplain to the Kinabatangan, during which she encountered many difficulties, but also experienced personal revival and witnessed such spiritual revival spread through the churches in the interior.