Canon Lawrence Lawin was one of the five Iban missionaries who were the earliest Anglican full-time workers in rural Sabah when the Sabah Anglican Interior Mission (SAIM) started in 1958. Next year he will be celebrating 60 years of ministry in the Diocese of Sabah, for the first few years as a teacher at Holy Cross Mission School and then more than 50 years as a priest. In the first part of this interview with him at his home in Kuala Sapi, he talks about how he first came to North Borneo (as it was called then) in 1959 as well as his early years of ministry as a teacher.

Q: Canon Lawrence, did you come from an Anglican family?

Actually I was the first to become a Christian in the family. I was baptised on the 5th of April 1954, and I was confirmed on the 6th of April the following year. Later on my parents became Christians too.

Q: What made you answer the call to come to Sabah for the North Borneo Interior Mission? Given that you were living in the west of Sarawak, what caused you to say, “I will go”?

Actually, I myself don’t know exactly why I arrived in Sabah. After I finished my Form 3 at St Luke’s Mission School, Sri Aman, I returned to my kampung. My ambition was to be an orang kampung (village dweller), to rear chickens or something like that. But then something happened very unexpectedly. On the 27th of December 1958, I was together with the other youth in my village—just chatting—because in Sarawak we were still celebrating Christmas in the longhouse. At 5 o’clock in the evening someone arrived and gave me a letter. I was surprised when I opened the letter because it came from the Diocese of Borneo (as it was at the time). In the letter it said that the Bishop wanted me to go to North Borneo to assist one of our former teachers, the late Francis Krie, who had started the school here in Kuala Sapi. 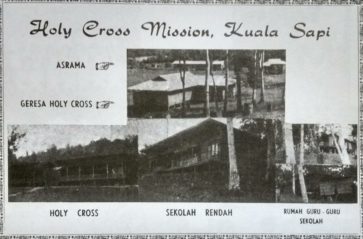 In the letter I was asked to go to Kuching to get my documents to go to North Borneo. It was a joy, actually, because I’d not travelled outside Sarawak. The Bishop sent me to Kuching Airport on the 4th of February. He said, “I will send you to North Borneo for two years.” Because my English was not so good at the time, I just said, “Yes, okay.” As I was just about to board the plane, he said a prayer for me, but then he said, “Don’t come back.” [laughter] Once again I could only say, “Yes.” And that’s the problem when you’re not completely fluent in a language.

Q: How was your journey to Kuala Sapi?

It started with a long plane journey. We started at 8 o’clock in the morning—Malayan Airways, it was 1959. We stopped at Sibu, Miri, Brunei, Jesselton, then finally we came to Sandakan. It was so dark in Sandakan Airport, but there was a very tall man there. I thought, “He must be a priest.” And indeed, it was Canon Frank Lomax, the Rector of St Michael’s. I stayed five days in Sandakan to wait for transport because at that time everything was by boat. I left Sandakan on the 10th of February 1959 by the government boat Mantanani, and arrived here at about six o’clock in the evening . It was so dark. At the time there was only one house by the river. On the 11th of February, I started teaching. I was an untrained teacher.

Francis Krie was the principal, and I was his assistant. But later in 1960, the Diocese asked him to go back to Sarawak, so he left me alone. We had four classes at that time. We started with 35 children but by 1960 we had almost 60 children. Holy Cross was the only English school in the interior of Labuk, so there were a fair number of people who wanted to come to learn English. Thankfully, by the end of 1960, a priest came from the Philippines.

Father Ticobay, that’s right. And so he helped me a little bit, but by the end of the year he had to go to Telupid. But at the beginning of 1961 it became much better because Sister Ena Florence [CJGS] arrived. We then had more teachers so the load was much lighter.

Q: When you first arrived here, were you already fluent in Malay?

No, my Malay was not good at that time, because I didn’t go to a Malay-medium school. You see, in Sarawak all the schools were in the English stream.

Q: How did you balance teaching and the evangelistic work of preaching?

Actually I was not involved much in evangelistic preaching at first, as I was in the school. But of course you know, as a missionary teacher, our first priority is to do some evangelistic work among the students. The first baptisms we had were in June 1960. Canon Lomax came to do them. There were also confirmations later in 1960. At that time Sabah was still under Sarawak—we were called the Diocese of Borneo—so we had Assistant Bishop James Wong come to confirm.

But after six and a half years at Holy Cross School I was asked to resign. By then in 1962, we had already became a separate Diocese, so we were not depending on Sarawak any more. Bishop Roland Koh asked me to resign. I was then sent to be attached to St Michael’s for four or five months before I went to Trinity Theological College in Singapore.

In the next part of the interview, Canon Lawrence tells us how he responded to the call to become a priest and his years of service, including a number of years as “the only Anglican priest in the interior.”