The Right Reverend Yong Ping Chung served full-time in the Anglican Diocese of Sabah for 37 years beginning in 1969, first as a priest, then as archdeacon and finally as Bishop of Sabah for 16 years (1990-2006). He also was elected as the second Archbishop of the Province of South East Asia (2000-2006). This year marks 50 years since he was ordained, and he continues to assist with preaching and confirmation around the Diocese. In this first part of an interview with him at his home in Kota Kinabalu, he speaks about his childhood, how he came to faith in Jesus and responded to a calling from God to the priesthood, as well as his early years in full-time ministry which coincided with a difficult period in the diocese’s history.

Could you tell us a bit about your childhood?

When I was young, my family lived in Semporna—my parents, my two brothers and me. My brothers and I went to Tawau to study at St Patrick’s Secondary School. Semporna was quite remote and primitive in those days. The road had not been opened yet, so we usually took the boat from Tawau to go home every holiday.

How was it when you were a student at St Patrick’s? I understand that’s where you first accepted Christ?

Yes. In those days Mr Jim Power was the principal, and it was he who introduced me to Jesus. He helped me to pray the Sinner’s Prayer and then handed me over to Archdeacon [Walter] Newmarch, the rector of St Patrick’s Church at that time. We went through the whole one-year catechumenate. So that’s how I started. Once I received Christ into my life, I began to be more interested in spiritual things.

Was there a particular reason or event that led to you welcoming Christ into your life?

Well, when I look back now I’d say it was God’s calling. At that time I was staying in the hostel. As principal, Mr Power was very interested in the spiritual lives of all the students. I was the head boy at that time, and one day I went in to see him to hand him some books. He asked me to sit down then asked me the question, “Do you want to believe in Jesus?” He was quite straight-forward. Of course, when the principal says such a thing to you, you have to be respectful and not say immediately, “No, I don’t.” So he talked to me about the life of Jesus and so on. And I replied, “Okay.” That was the beginning. 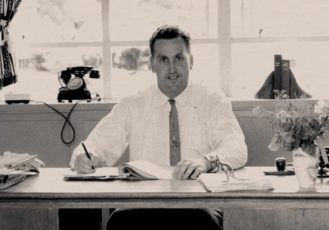 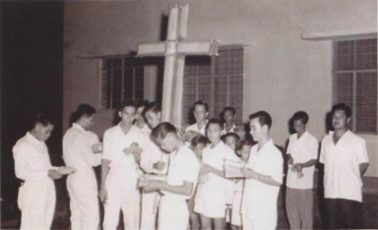 Wow. And it sounds like you had a very lengthy, rigorous preparation for baptism.

Well, that was the normal thing in those days. It wasn’t just a three-month short course. Revd Newmarch was very keen on making disciples. And so once a week for one whole year, I went to see him and he taught me various things about Christianity. It was quite rigorous, yes. Actually I learned most of my Christian foundations from those sessions.

What did you do after you left St Patrick’s Secondary School?

At that time one could study at St Patrick’s only up until Form 3. After I finished my Junior Certificate exam, I came over to All Saints’ School, Kota Kinabalu to do my Form 4 and 5. Then I went to Canada for my university studies. Back then it was possible to go after Form 5. The university said, of course, that I had to have a Grade 1 and a good result for them to admit me lah.

When you left for Canada were you already going to study theology?

Well, I had already decided—or, rather, God had already decided—that I should study theology. By the time I finished Form Five, I already knew that I would go and train for ministry. But the question was: where? There were many suggestions. Some said I should go to Australia, some said to Hong Kong, some said to Singapore. But at that time the principal of All Saints’ was Canon Edward Rusted. He and Revd Newmarch discussed the matter, and they felt I should study theology in English.

So they found a programme in Newfoundland in which I could do an undergraduate BA with Biblical Studies as the major subject. This was because there was a theological college, Queen’s College, attached to Memorial University—it was one of the university’s faculties. I also had two minors—philosophy and mathematics. Everything just seemed to fit in perfectly.

Was this theological college specifically Anglican?

Yes, it actually was a little bit like our own Anglican Training Institute. It started as a diocesan college training men for priesthood in the diocese. It was gradually upgraded until it become part of the university. 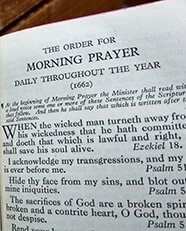 The Morning Prayer service in the Book of Common Prayer (1662)

Was the Anglican Church and the theological college in Canada very different from what you had experienced at St Patrick’s?

In those days, things were, in a sense, quite uniform lah. If you wanted to be a theological college, you had to do certain things. So we had daily Morning Prayer and Evening Prayer and regular Holy Communion in the college chapel.

What was it like to return to Sabah after your studies?

I came back in 1969. Of course, studying is one thing, but coming back and starting in ministry is a different thing. Also, when I came back, it was during the time that Tun Mustapha was sending away all the missionaries. So for a period we were very short of clergy. We had only six full-time priests, including [Revd] Lawrence Lawin and [Revd] Arnold Puntang.

Where were you serving initially?

Initially, when I came back, I was serving in All Saints’ Cathedral for about four years. Ven. Archie Briggs was the dean, but he was seldom there as he was also the Archdeacon and later the Vicar-General looking after the whole diocese. So I became the only priest that looked after all the daily services and everything else which was happening.

Did you find the workload difficult, given that you had to handle everything?

No, it actually quite an exciting period, y’know. We got to do things, because we were the only ones. So that means we learned a lot by doing. Archdeacon Briggs tried to be in the chapel at least once a week. We would have our staff meeting just in the chapel. But that is the time that we began to see that we needed to train local priests. By the time Archdeacon Briggs had to go as his work pass was not renewed, there was almost nobody left. And so we began to very purposefully to encourage locals to enter the ministry.

How quickly did these efforts bear fruit?

Very slowly. Partly because, I think, in those days in our diocese, the priest’s salary was so low. When I first started, my monthly salary was 250 dollars. So often by the end of the month, our money would run out and all our food also would run out. [laughs] So having experienced that, when I had some influence over the diocese, we began to raise the salaries of the younger priests. 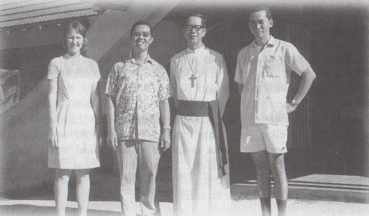 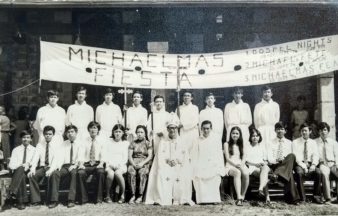 Where did you go after your four years at All Saints’?

I was sent to Sandakan and was based in St Michael’s Church for twelve years.

What was it like in St Michael’s? I understand that back then it was very high church.

Well, for a time, yes because their priests came from the USPG [United Society for the Propagation of the Gospel]. So the people were used to high church services. When I went there, I just followed along. There is no point to argue about small things and forget about the more important things. So, we started Bible studies, study groups and lay training to help our people to be equipped. 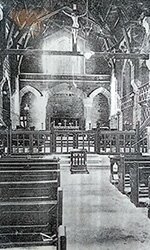 Interior of St Michael’s Church in its earlier days

Rather than change certain things that would be controversial, you focused on the important things?

Yes. Some of those who were used to high church worship slowly changed as they became more mature, biblically and spiritually. But for those who wanted to continue to do the high church thing, that’s okay. Those are only outward things, not the real essence. The real essence is a life touched by Jesus.

Am I right that you were also appointed as archdeacon?

Yes, while I was in Sandakan, I was appointed to be the archdeacon. Back then there was only one archdeacon, so I had to travel quite a lot.

And you were also chairman of the SAIM (Sabah Anglican Interior Mission)?

Yes, at that time there was almost nobody, so you had to do everything.

So as Chairman of the SAIM and as archdeacon you had to go into the interior a lot?

Yes, that was the beginning of my involvement in the interior. As the chairman of SAIM, I had to look after the rural churches, so I went to the different parts of the interior.

Interesting. What were some of the things you did to encourage mission and outreach in the interior?

I think that to encourage mission we have to work together as one diocese. So I quietly encouraged some of the town priests to go into the interior. [Revd] James Lee, for example, was in the interior for a long time. [Revd] Daniel Vun too for a time.

Later on, it was the priests from the interior who came out to the towns and cities. And so now we have Dean Musa [Ambai] and we have our our own Bishop Melter [Tais]. They are indigenous leaders. In fact, Canon [Arnold] Puntang was the rector of St Patrick’s, Tawau for a period in the 1970s. Looking back, it’s a good thing that we never differentiated between town and interior priests. We were and are just one diocese.

In the next part of the interview, Bishop Yong Ping Chung tells us about his later years of ministry, including some of the blessings and challenges which he experienced while serving as Bishop of Sabah.